At the end of a neighborhood street, Alex, 9, plays basketball with his family and friends. Catching his opponent off guard, he makes a back-door cut to the basket and calls for the ball. The pass, the right-hand lay-up, the sweetness of the two-point play – these are moments of normalcy for the little boy, who has been plagued by a debilitating, incurable disease for the past four years.

Alex Bancroft’s journey began at the age of 5, when his health began to spiral out of control: vomiting, persistent and sometimes uncontrollable diarrhea, and worst of all, alarming weight loss. After visits with two pediatricians and a gastroenterologist, his parents thought they had a diagnosis and a treatment plan, but Alex’s illness persisted. Watching his son suffer from this unknown illness, Alex’s father knew the family needed another opinion.

"It was hard," said Alex's father, Bob Bancroft, who narrates the boy's story in the opening episode of the second season of Weill Cornell Medicine's Inside Medicine video series. "There's nothing you can say that makes him feel better. Nothing you can do to make it go away."

After some investigating, Alex’s parents finally found an answer, and it came from Weill Cornell Medicine pediatric gastroenterologist Dr. Thomas Ciecierega. Alex has Crohn’s disease, a chronic inflammatory bowel disease that in children can lead to a variety of symptoms, such as severe weight loss, growth failure, decreased bone density and eye problems. 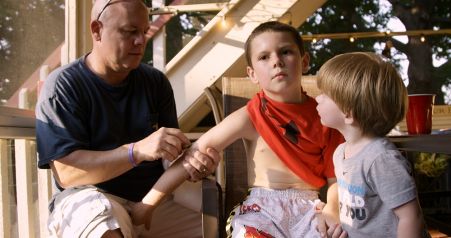 Bob Bancroft gives his son Alex a shot of methotrexate to treat his Crohn's disease, while Alex's brother Christian looks on.

With help from one of Dr. Ciecierega's colleagues, Dr. Neera Gupta, the team discovered that Alex actually had delayed bone age — a common complication of pediatric IBD. Although he was 9-years-old, Alex’s bone age was of a 7-year-old. Dr. Gupta, an associate professor of pediatrics, director of research at the Weill Cornell Medicine Pediatric Inflammatory Bowel Disease Center, and an associate member of the Jill Roberts Institute for Research in Inflammatory Bowel Disease at Weill Cornell Medicine, is investigating the underlying mechanisms of differences in growth impairment between boys and girls with Crohn’s disease – research that Alex hopes to one day participate in.

"If there’s something he can do as a patient to potentially help that next child, at the age of 4 or 5 that’s being diagnosed, not have to go through the same things he had to, then he wants to do it," Bancroft said.

Along with wanting to help other children with Crohn’s disease, Bancroft said his son has learned to manage his disease. On the first day of treatment, Dr. Ciecierega, an associate professor of pediatrics, shared with Alex an important tip: "This is your disease," Bancroft recalled him saying. "You need to learn it; you need to understand it."

"I think that is what's really made such a difference for us as parents,” Bancroft said. “Dr. Ciecierega is teaching Alex how to live his life with Crohn's disease. He’s teaching him that you can live a normal, fulfilling, happy life with a disease that has no cure at this point."

In the last 18 months of treatment, Alex has had no flare-ups, signs or symptoms of the disease, giving his parents a reason to hope.

"It’s difficult to not know what tomorrow brings for your son,” Bancroft said. “My hope is that he can grow old and be happy — that he can live his life and just grow old."

Using the social media hashtag, #WeAreWCM, read more stories to discover the faces behind the medicine and how they are paving the future for innovative healthcare.