For information about COVID-19, including symptoms and prevention, please read our COVID-19 patient guide. If you need to see your provider, please contact us to see if a Video Visit is right for you. Please also consider supporting Weill Cornell Medicine’s efforts against the pandemic.
Pediatrics

Dr. Jeffrey Perlman grew up in South Africa and attended medical school there. But by 2006, when he was tasked with helping set up the pediatrics program at Tanzania’s Weill Bugando Medical Centre—then newly affiliated with Weill Cornell Medicine—he’d been living and working in the United States for decades. So coming face to face with the reality of how many newborn lives are lost in Africa’s medically under-resourced nations was both shocking and heartbreaking. “I saw all these babies dying unnecessarily,” says Dr. Perlman, a professor of pediatrics who directs the neonatal ICU at NewYork-Presbyterian/Weill Cornell Medical Center. In America overall, according to figures released by the CDC in 2015, the neonatal mortality rate averages four for every 1000 births—and at a state-of-the-art hospital such as NewYork-Presbyterian/Weill Cornell Medical Center, Dr. Perlman says, the number is just .7 per 1000. In Tanzania, by contrast, Dr. Perlman encountered a rate of 39 per 1000 births—or roughly two newborns dying every hour. Dr. Perlman resolved to change that. So he spearheaded implementation of a program that had recently been developed by the American Academy of Pediatrics to train midwives—who attend the majority of births in Tanzania, as in many developing countries—in the fundamentals of resuscitating a newborn. Called Helping Babies Breathe, the program is geared toward resource-limited communities—those that lack the advanced equipment and trained medical personnel found in wealthier nations. The program offers detailed instructions, such as how to ventilate an infant with a bag and mask; it also stresses the key concept of the “golden minute”—the time after birth by which it’s essential that a baby be breathing well on his or her own or with assistance. In an article published in Pediatrics in February 2013, Dr. Perlman and Tanzanian colleagues reported that the program was highly effective: in the eight hospitals in which it was implemented, neonatal deaths dropped an average of 47 percent.

But for Dr. Perlman, that was just the beginning. In recent years he has focused on saving the lives of an especially vulnerable infant population: those who are born prematurely. A full-term pregnancy ideally lasts about 40 weeks, and a baby is considered premature if it’s born before 37 weeks of gestation. In Tanzania, the limit for viability is around 38 weeks (compared with 24 in the United States); Dr. Perlman and colleagues concentrated on improving outcomes during the span from 28 weeks to just shy of 35. “In those babies, about one an hour dies in Tanzania,” he says. “The hospitals don’t have facilities to breathe for the babies if they have any problems, like we have here in New York.” 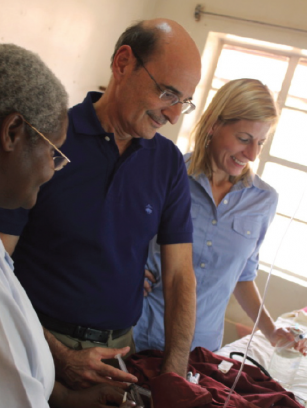 The aim, then, was to prevent those respiratory problems to begin with. In spring 2015, Dr. Perlman launched a pilot study (funded in part by Bloomberg Philanthropies) to evaluate the efficacy of what he calls a low-cost “care bundle” for mothers and babies: giving antenatal steroids to women in preterm labor to aid the baby’s lung development; administering antibiotics to those in active labor and to newborns; and keeping the infant’s body temperature from dropping below 36 degrees Celsius (96.8 Fahrenheit) immediately after birth. Conducted at four Tanzanian hospitals including Weill Bugando, it ran for two years and involved nearly 3,000 premature babies. As Dr. Perlman and colleagues reported in PLOS One in March, when all elements of the bundle were used, preterm infant mortality dropped a striking 70 percent—saving about 175 lives during the study period alone. And one of the most promising details of all was the modest price tag. “It’s about $7,” says Dr. Perlman. “For the cost of a couple of lattes, that’s a baby you can potentially save.”

In spring 2018, Dr. Perlman went to United Nations headquarters to report his findings and pitch the program to potential funders including UNICEF, the World Health Organization, USAID and the Gates Foundation. He ultimately hopes to spread the care bundle program to several countries in southern Africa, including an under-resourced region of his home nation. Based on the data in the PLOS article, Dr. Perlman and his group have developed an app that guides midwives to the appropriate treatment for each patient, using a model of predicted survival; they’re currently evaluating its efficacy at several sites in Tanzania. “It’s a no-brainer. This is not rocket science,” he says, stressing the program’s ease of use, low cost and life-saving potential. “My philosophy is, ‘What can I do in a simple way?’ That’s why I’m passionate about this project.”

For the past decade, Dr. Perlman has been returning to Africa regularly to visit Weill Bugando and the other hospitals where the programs are being tested and implemented, as well as to review the data from each site during a day-long meeting in the Tanzanian capital Dares Salaam; he now goes for about two weeks twice a year, in March and August. He stresses that working closely with front-line clinical staff, as well as Tanzanian government officials, has been essential to the projects’ success—a sentiment echoed by Prisca Ringia, a veteran midwife who has been instrumental in implementing both Helping Babies Breathe and the premature care bundle at Weill Bugando. “Jeff really recognizes that the midwives are key—we are the first people to touch the babies in their first seconds in the world,” says Ringia, who has worked with Perlman since 2006. “We really appreciate that, and his enthusiasm, commitment, and dedication to Tanzanians.” Ringia was a co-author on the Pediatrics and PLOS papers; in fact, her name came before Dr. Perlman’s. It’s his long-standing practice not only to share credit with his Tanzanian collaborators, but to put their names first. “I’m at the end,” he says, “because it’s not about me; it’s about them.” And, he stresses, when he visits labor and delivery rooms at the various hospitals, he doesn’t treat patients personally. “I don’t intervene, I coach,” he says. “If a baby comes out and is not breathing, I tell the midwife what to do. I’ll show them how to apply a mask to help the baby breathe, but I won’t do it myself—because once I walk out that door, I’m not going to be there to do it. So they get the baby back and crying, and they feel good because they did it. There’s nothing more rewarding than to see people feeling like they’ve accomplished something so very important: they’ve saved a baby.”

This story first appeared in Weill Cornell Medicine, Fall 2018 and in WCM's Newsroom.